Skip to content Skip to search Skip to navigation

Twice a year birds that spend the winter on the Solent set off on a hazardous journey.

In spring they’re on their way to their summer breeding grounds and in the autumn they travel back to the nutrient rich mudflats of the Solent.

So what triggers migration and why do birds migrate at all?

For thousands of years we were completely mystified by migration. We had little or no idea where our overwintering birds disappeared during the summer. In ancient Greece they believed birds turned into fish and in medieval times people thought geese grew from barnacles. As late as the nineteenth century, even famed naturalist Gilbert White suggested that swallows and swifts might hibernate in the mud at the bottom of ponds.

When people began to take an interest in birds’ behaviour, they noticed at certain times of year birds put on weight and became restless. They’d spotted that some species of caged birds went through a restless period each spring and autumn, repeatedly fluttering towards one side of their cage. German scientists called this behaviour ‘zugunruhe’ – from the German words ‘zug’ meaning move or migration, and ‘unruhe’, meaning anxiety or restlessness. The idea of some kind of migratory instinct, triggered at certain times of year, was discussed as early as the 1700s.

But it was thanks to an unfortunate white stork that we finally knew for certain that birds actually travel extraordinary distances. This unlucky bird was found Germany in 1822  with a spear from central Africa in its neck. It demonstrated beyond doubt that storks were migrating long distances each year, rather than hibernating or changing form in winter.

There have been dozens of other storks arriving back in the area with spears in their neck since this first arrival, and you can still see the original Pfeilstorch (‘arrow-stork’) at the University of Rostock.

However it wasn’t until the start of the twentieth century with the introduction of systematic ringing and a global network of bird spotters, that we have been able to properly track the movement of birds across the globe.

These findings have revealed an even more extraordinary story of tiny birds travelling thousands of miles each year. 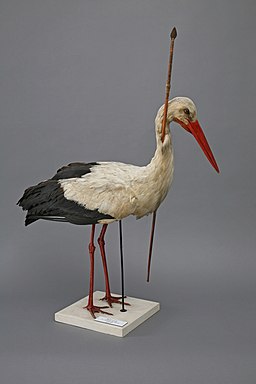 What sends millions of birds into the perilous skies every spring and autumn? However risky a long journey might seem, migration is all about survival.

All birds really need in life is a plentiful supply of food and a safe and secure place to breed. But places change with the seasons, and what might make a perfectly good summer home can be very inhospitable in the winter.

Birds that breed in the Northern Hemisphere tend to head northwards in the spring to take advantage of longer daylight hours, fewer predators, a flourishing food supply, and a good choice of places to nest. But as winter approaches, the availability of food drops and birds move south again.

For example, Arctic Siberia and Greenland might be the perfect isolated summer residences for our little sanderling, with plentiful food supplies, no disturbance from humans and less danger from predators.

But once the temperature drops and the days begin to shorten, these tiny birds have a better chance of survival by travelling thousands of miles to spend the winter on our shores.

How do birds navigate?

While modern technology has told us much about migration behaviour, there’s still lots we don’t know. Birds have a remarkable homing instinct, allowing them to return to the same area year after year, even when their migration takes them halfway around the world.

The secrets of their supreme navigation skills aren’t yet fully understood, probably because they use lots of different senses to plot their routes which vary from species to species. It’s thought they use a combination of triggers including the earth’s magnetic field, their sense of smell, the position and path of the sun and stars, or simply recognising natural landmarks.

Two of our overwintering visitors – black-tailed godwits and dark-bellied brents – make extraordinary journeys to and from the Solent and their summer breeding grounds.

Godwits are much-loved visitors in the Solent for the winter, travelling over 1000 miles to and from Iceland to get here. An extraordinary journey for this little bird which weighs less than 300g.

Did you know that black-tailed godwit pairs split up over the winter and, on average, spend the colder months about 1000km apart? At the end of the season they manage to reunite back in Iceland arriving within a few days of each other. What amazing synchronicity!
⠀
We’re lucky to know quite a bit about the migratory behaviour of the black-tailed godwits that spend the winter on the Solent. This is thanks to an international network of observers who give up their time to track their movements. About 1.5% of the Icelandic black-tailed godwit population is colour-ringed and we know where more than half these birds have spent the winter.

Godwits hold the world record for the longest migration by a bird without stopping for food or rest. In 2020 a satellite-tagged bar-tailed godwit (quite tricky to tell apart from our Solent black-tailed godwits) flew directly from Alaska to New Zealand with an overall flight time of about 224 hours, travelling a distance of about 8,000 miles. The record-breaking bird is know as 4BBRW after the blue, blue, red and white rings around its leg.⠀
⠀
While bar-tailed and the black-tailed godwits have the same aerodynamic body shape – described as being built “like a jet fighter” – black-tailed godwits have longer legs than their bar-tailed cousins. If you see a godwit flying, it should be easy to spot a black-tailed variety as they have a dramatic black and white stripe on each wing, as well as a black and white tail.⠀

Our Rangers are often asked how fast our migrating birds travel between their summer breeding grounds to overwintering on our Solent shores. Dark-bellied brent geese fly at over 40mph in their 2,500 mile epic journey to and from Siberia – covering more than 100,000 miles in a lifetime.⠀

In Siberia they find the isolation they need with few predators, plenty of food and a choice of nesting sites, but once the daylight hours start to reduce and the weather gets colder, they need to return to more southerly territory. We’re lucky to have 10% of the global population making their home on the Solent every winter.
⠀
One dark-bellied goose fitted with a GPS tag in Essex was recorded as spending 2 months in Northern Germany after leaving the UK in March, before covering 1134 miles in just 60 hours to reach Russia in late May. What an extraordinary journey!

These geese migrate in family groups, staying together from one breeding season to the next, and don’t use the typical V-formation used by other species.

So how do brent geese manage to navigate thousands of miles to find their way to the Solent eelgrass every winter?

Research among their cousins, the light-bellied brent geese, shows they return to the same spots they were taken to as youngsters. This means their routes are learned from their family elders rather than being inherited genetically.

As brent geese can live for about 19 years, they’re able to share their knowledge across many generations.

Bird migration is one of the UK’s most awe-inspiring natural events. It is truly breath-taking to watch migrating birds pass overhead, marvelling at the distances they’ll be travelling.

This website uses cookies to improve your experience while you navigate through the website. Out of these, the cookies that are categorized as necessary are stored on your browser as they are essential for the working of basic functionalities of the website. We also use third-party cookies that help us analyze and understand how you use this website. These cookies will be stored in your browser only with your consent. You also have the option to opt-out of these cookies. But opting out of some of these cookies may affect your browsing experience.
Necessary Always Enabled
Necessary cookies are absolutely essential for the website to function properly. These cookies ensure basic functionalities and security features of the website, anonymously.
Analytics
Analytical cookies are used to understand how visitors interact with the website. These cookies help provide information on metrics the number of visitors, bounce rate, traffic source, etc.
Advertisement
Advertisement cookies are used to provide visitors with relevant ads and marketing campaigns. These cookies track visitors across websites and collect information to provide customized ads.
SAVE & ACCEPT
Powered by